The trend is expected to continue into 2018 as a mix of relative affordability for condo units and price appreciation for detached homes in recent years, combined with government policy changes in both markets, has helped push an influx of buyers toward condo ownership.

The RE/MAX 2018 average residential sale price expectation for Canada is an increase of 2.5 per cent as the desire for home ownership remains strong, particularly among Canadian millennials.

According to a survey conducted by Leger on behalf of RE/MAX, the appetite for home ownership remains strong with roughly half of Canadians (48 per cent) considering the purchase of a home in the next five years. Of those who are considering purchasing a home, the top three reasons for doing so are to upgrade on their current home, to purchase a starter home as a means of entering the housing market and to upsize from their current home to accommodate a change in family make-up. The survey also found that access to outdoor spaces was a key factor for many Canadians when considering purchasing a home, with 87 per cent agreeing that access to green space was important to them and 82 per cent agreeing that having a backyard was important.

In order to find a balance between the home features they’re looking for and affordability, many buyers are continuing to look at real estate markets outside of the country’s largest urban centres. These move-over buyers leaving the GTA and Greater Vancouver have contributed to increased demand and considerable year-over-year average price increases in Kelowna (nine per cent), London-St. Thomas (18 per cent), Hamilton-Burlington (15 per cent), Barrie (19 per cent), Durham region (19 per cent), Niagara (23 per cent), Kingston (eight per cent), and Ottawa (10 per cent).

Much of the activity in regional markets across Ontario was fuelled by price appreciation in Toronto during the first four months of the year prior to the introduction of the provincial government’s Fair Housing Plan. The 16-point plan introduced a 15 per cent non-resident speculation tax, which slowed demand from overseas buyers in the upper-end of the market. The policy changes as a whole curtailed activity significantly for single-family detached homes throughout the GTA in the short-term.

The new OSFI mortgage qualification rules that come into effect on January 1, 2018 also impacted housing market activity toward the end of this year and are expected to slow activity in real estate markets across Canada in the first part of 2018. This fall, a number of regions including Fraser Valley, Edmonton, Regina, Winnipeg, Mississauga and Oakville experienced increased demand from buyers looking to purchase homes before the new stress test regulations take effect.

It is expected that the new mortgage stress test will slow activity across Canada during first few months of 2018 and at the end of November, the Bank of Canada predicted that the new regulations could disqualify up to 10 per cent of prospective home buyers who have down payments of 20 per cent or more. The regions expected to feel the greatest impact of decreased buyer purchasing power are Victoria, Greater Vancouver, Kelowna, North Bay, London-St.Thomas, Barrie, Hamilton-Burlington, the GTA, Durham region, Kingston, Ottawa, Halifax and St. John’s.

As oil prices continue to stabilize, both Calgary and Edmonton have experienced modest average residential sale price increases in 2017. In Calgary, the average residential sale price rose by approximately two per cent, to $487,931 up from $478,100 in 2016. Buyers and sellers remain relatively tentative, but the city’s ongoing evolution into a major tech and distribution hub, as seen with Amazon’s recent announcement that Calgary will house one of the company’s key distribution centres, is expected to increase confidence in the real estate market moving forward. In Edmonton, sales rose by an estimated five per cent year-over-year, from $357,916 to $375,788 in 2017, with a variety of new infrastructure projects, including construction on the Valley Line expansion of the LRT system, expected to contribute to increased activity in the coming years. 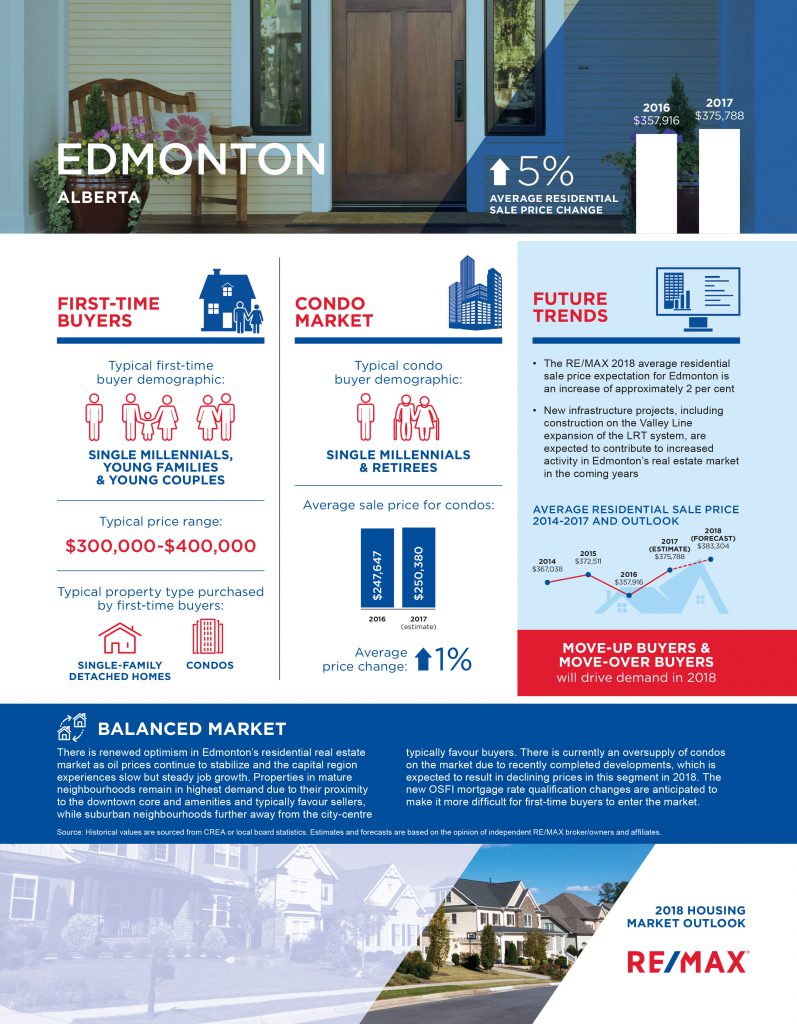